Successful action for the release of Catalan political prisoners

The reason for the action was the decision in Spain two weeks ago to send 9 Catalan politicians behind bars for periods of between 9 and 13 years. They received these sentences for organising a referendum two years ago or for allowing a debate. The FNP-group in the provincial council thinks it is absolutely to be rejected that colleagues in the EU are put behind bars for exercising their role as elected representatives.

Sybren Posthumus, member of the provincial council for FNP: "It is unacceptable that exercising the democratic right to self-determination leads to such sentences. Organising a referendum and letting people vote cannot be a crime in a well-functioning democracy. In international covenants of the United Nations the first article holds that all peoples have the right to freely take decisions about their own future." 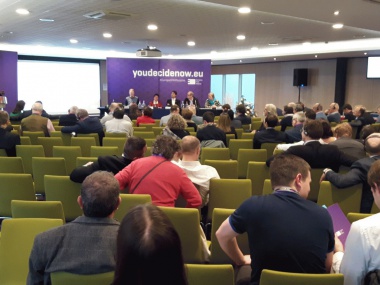